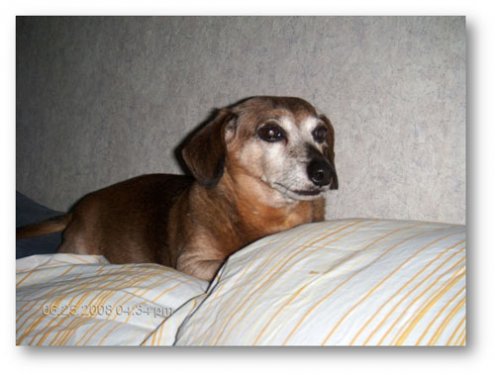 Meet Bear, born circa 1992, died June 6, 2010. Bear was preceded in death by his brother, Jay, a black and tan tweenie. Bear came to live with us some 15 years ago, after becoming a nuisance in his then neighborhood. Seems that little boys thwarted him and he, in turn, nipped at them or anyone that got close to our granddaughter, his original master.

Bear could back the largest man into a corner — all 15 pounds of him. He packed a growl that could literally scare one to death. Up until a few months ago, he was feared by most. Towards the end of his life, he mellowed out, because he lost his hearing and was going blind.

Bear shared his home with two standard Dachshund sisters, Dapple and Tootsie; his miniature Dachshund brother, Bubba; and, two human parents. A pecking order was established early on — Bear was the boss!

We miss Bear, but know that he is heaven, protecting his brother Jay-Jay. It was a privilege to have been a part of this wonderful Dachshund’s life. It was a long and for the most part, healthy life. His heart was strong and his loyalty immeasurable.